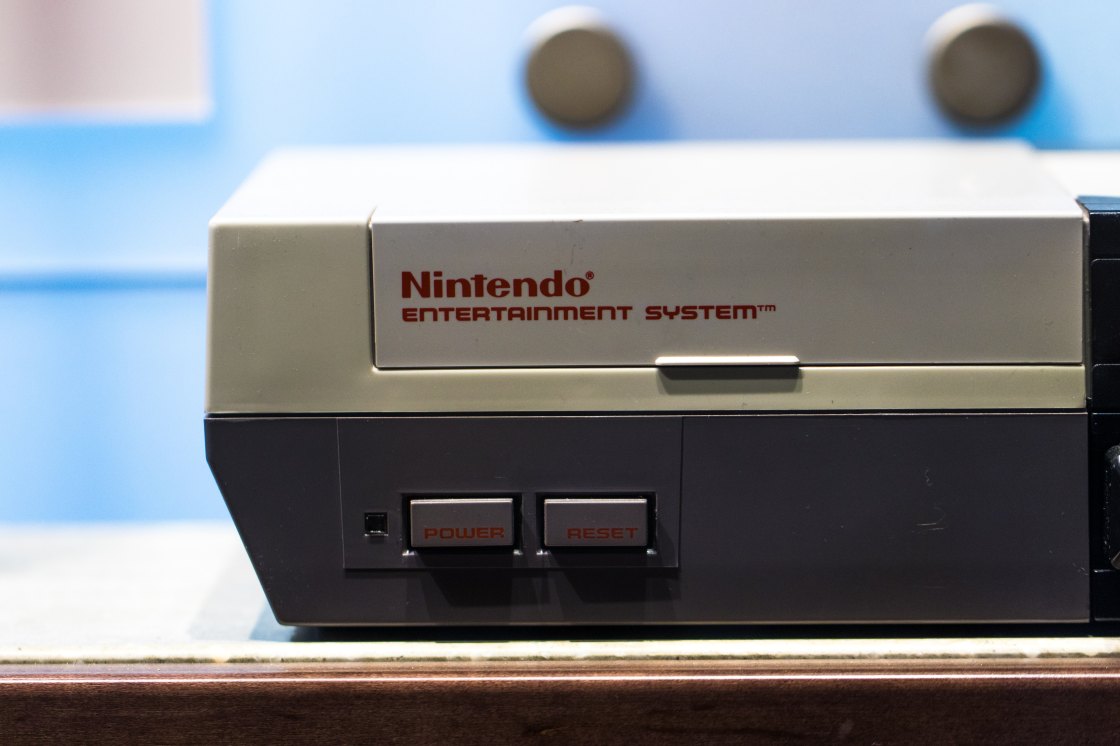 Enzo bore down on the controller, rolling backward into his beanbag and crossing his legs in front of him on the floor. Twenty lives. He’d certainly win at this point. I mean, he could do anything with twenty lives. He could spend all day every day playing video games, for one. The bliss of never having to share the console with his sister who always wanted to play Bubble Bobble. The freedom of never having to go to school, never having to take out the trash, never having to go downstairs for dinner. Just Enzo and Mario forever. He could easily let himself starve to death in front of the television, going for his seventy third consecutive princess rescue.

That might get boring, eventually, he surmised, and then maybe with another life he’d care about the other kids at school and what they thought. He’d do the homework. He’d get the grades. He’d talk to Rachel. He’d take her to the dance and then they would, I dunno, dance. He had a hard time picturing what that would look like: it always just looked like swaying in place to him, but somehow when other people did it, they looked cool and he only ever just looked awkward. And by the way his whole body tensed up just thinking about it, he imagined he’d probably blow it, big time. And he’d probably just die on the spot.

For one life, he’d definitely leave Galveston, once and for all, get to the mainland and never stop going. He’d see what cities were all about, with their big highways and their tall buildings. Maybe he’d even get a job in one of those buildings. So long as that job was washing windows, because that seemed like the most adventurous thing you could possibly do in a city. He’d be up there with his squeegee and a rope, and some people in an office would be having an important meeting with their projector running, and Nancy in the corner with her Rolodex, and Bob and Frank would be giving the reports, and there would be Enzo, hanging from the rope, making faces at them through the window when the line snapped.

Working for NPR might be an option. His sixth grade teacher just said he had an NPR name, but he didn’t know what that meant. Enzo Rattan-Buri sounded totally normal to him, but she said it made him sound like he was reporting from Islamabad. He hadn’t wanted to admit that he didn’t know where Islamabad was, but when he looked it up later, he found out it was the capital of Pakistan, and that they were always getting into arguments with the Indians, and they both had nuclear weapons, so that might not be a particularly long life after all.

Being a marine biologist had always been a goal of his, so a life spent doing that might be fun. When he pictured what being a marine biologist must be like, he always imagined a house on the beach, part laboratory, part aquarium, where he could train dolphins to do cool tricks and where he would load them up with sonar packs so they could go search the depths of the ocean. But when he had visited the Kemp’s Ridley Sea Turtle lab that summer during Science Camp, he’d found that the whole thing was much less James Bond than he had expected. Did these people have no sense of drama? Anyway, he figured in that life, a shark would probably get him, and he’d be happy to just let the sea take him.

Maybe he’d be a dad in one life. Better than his own dad, that would be for sure. He wouldn’t make his kids do chores. And he certainly wouldn’t stay at work so late every night. So then, when he told his kids to do something, maybe they would actually listen to him, instead of rolling their eyes and taking forever to do it. They’d play ball. So then, when Enzo’s kids got to gym class, they could actually play with the other kids. They could run and kick stuff and, I dunno, do something other than stand along the wall counting the minutes until the bell rings. And while they were playing in the park some day, if a ball hit him in the head and took him out, at least he’d have been a good dad.

Or he could be a lawyer like his mom. He could go into court and shout at the judge and say I Demand That You Release My Prisoner! At Once! And the judge would stand up and clap for him for making such a clever case, and his prisoner would hug him and cry on the collar of his very new, very grey suit. But then that night, maybe the sister of the prisoner’s victim would come to Enzo’s house and plant a bomb under his car to get revenge. And then when he turned the key in the ignition: boom.

He couldn’t be a doctor. Or, at least, being a doctor would be a very short way to spend a life, because he’d still faint at the sight of blood, and it was probably only a matter of time before he hit his head on something and took himself out.

Fireman seemed almost like he was asking for it.

Another knock on the door. Time’s up, Bucko. Got it mom. I’m just saving. I’ll be down in a minute.

An elderly neighbor, Ann, had just moved off to Arizona to paint the desert in her retirement. She was an old hippie and he was pretty sure that she was his best connection for weed if he ever got up the courage to try it. Hers could be an interesting life. She had called his mother the week before, explaining that she was hiking in the morning and painting phallic landscapes in the afternoon. She’d always had a kind of wistful way about her, and Enzo thought being kooky in long purple robes might not be a terrible way to spend a life, even if there were scorpions in the desert.

Being a movie director would be awesome so long as it was something like Spielberg and not one of those art movies his parents watched. Enzo could make adventure movies like Indiana Jones and make the faces melt off Nazis for fun. Or make awesome puppets like in Labyrinth. And if he got to meet David Bowie, all the better. His dad had returned from a business trip with Chinese medicine balls for Enzo and his sister that chimed in your hand when you rolled them around. Enzo had immediately stolen Lauren’s so that he could practice being the Goblin King. He’d just have to watch for falling light fixtures and angry actors who didn’t get the parts they wanted.

Music was his dad’s thing, and Enzo didn’t really feel like learning more about it. His uncle had gotten him a theremin for his birthday last year, and he’d stayed out in the garage for a week trying to make it do something other than shriek at him, but Enzo wasn’t particularly gifted with sound. He could try, but he might not make the best musician. So if anyone murdered him like John Lennon, it probably wouldn’t be for claiming he was more popular than Jesus; it would more likely be because they were just trying to get the noise to stop.

Reading had always been something Enzo enjoyed, at least until his mother made him read Of Mice and Men last year in the 5th grade. He’d finished it in class one day when Ms. Parsley had given them all some free time, and she’d all but carried him out of the classroom when he arrived at her desk, tears streaming down his face, book in hand, pointing at the hall pass but unable to make any sound for fear of alerting the other kids to his distress. She’d made his excuses and had delivered his knapsack to him at the nurse’s office a little while later with a knowing look. He could use one of his lives to be a writer, if only to give Lenny a better life. He’d take the bullet for him if he had to.

But a poet, now that would be a cool life. Enzo would get to do all kinds of drugs, and sit around and think about words, and they didn’t even have to make sense. His mother had given him Ginsberg’s “Howl” as an apology for Steinbeck. She said it was weird, and maybe he’d like it, and that hopefully it would mean he wouldn’t turn into a Yuppie. He still wasn’t ready to trust her on novels yet, but he was grateful for that angry fix, and it had taught him about peyote, which he might overdose on trying to catch a glimpse of something prophetic.

Enzo, Lauren’s already at the table. We’ve both asked nicely. Please don’t make me come back up here. Fine dad. On my way down.

Nevermind! He’ll become a super villain – something truly awful, not one of those bad guys with a heart of gold who is just misunderstood. No, he’ll be the worst. He’ll poison the drinking water. He’ll bomb a school. He’ll set fire to his own house with his family inside. He’ll make them wish they never told him to get up from his beanbag while they cry and gasp and beg for him to unlock the door, and, all the while, as the fire consumes him he’ll just laugh and laugh and laugh.

Or he’ll just leave. He’ll disappear. And they’ll put his face on a milk carton, and they’ll give a press conference, and beg for him to come home. And years later, when they’re all shriveled up and hollow because they lost him and never could find him, he’ll show up and stand on the sidewalk next to the mailbox, and just wait for one of them to catch a glimpse of him, and then he’ll disappear again.

Or he’ll get the best revenge by playing it cool, laying low, going down to dinner like his mother wants, seeming like he cares, and then someday at her funeral, he’ll tell everyone what he really thought of her. Her and her fascist dinner policies. And Aunt Jocelyn will cry, and Uncle Fred will turn purple like he does when he sees Reagan on tv. And then Enzo will skip out of the funeral home, swiping a piece of cake as he goes.

Or he’ll join the circus. Become a clown or a sword eater or a bear wrestler. And he’ll move from town to town, living with the other weirdos under the big top, where everyone judges them but they pay to judge them so it’s fair. And the only time people care about whether you’ve eaten dinner or not is when you’re about to put your head in the bear’s mouth and you smell a bit too strongly of steak.

The screen died as his mother yanked the cable unceremoniously from the wall.